Named for its restriction to only allow common cards, Pauper had its origins on Magic Online where it was first popularized by players. However, it quickly gained a big following and became an official Constructed format.

Many variants exist, but the most commonly played version of Pauper allows commons from all of Magic‘s past. The resulting environment features various high-powered decks, including the full spectrum from beatdown to control to combo strategies. 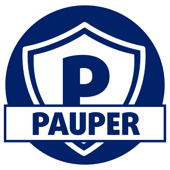